THIS IS THE LAST CHAMPION FINISHED HERE AT TAKASHI.  CH. LOMONTE'S RIVERVIEW DIVA,  OUT OF CH. HYLAN SHO TRU RIVERVIEW ROC ON X CH. TAKASHI'S AMERICAN MAID.  BRED BY MYSELF AND DANYELLE LOMONTE.  I'M HANDLING IN THIS PHOTO. 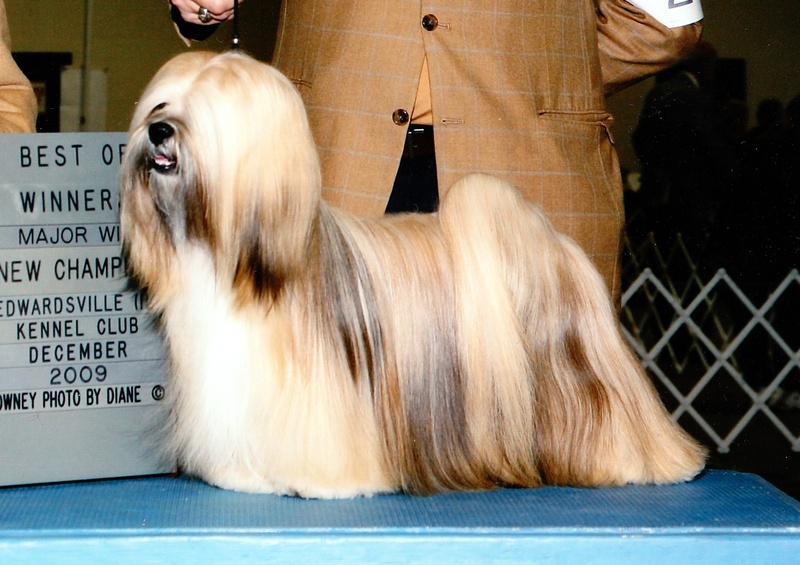 THIS IS BOOMER!  OUR NEWEST CHAMPION WHO FINISHED IN DECEMBER OF 2009, AT THE BELLEVILLE, ILLINOIS SHOWS. WINNING A 4PT & 5PT MAJOR!  HE IS CO-OWNED BY MYSELF AND BREEDERS, LYNN REPLOGLE AND JAN GRAUNKE, PLUS DEANNA MAXWELL.  HE IS NOW OWNED BY TAMIKO BURRIS OF BLUE SPRINGS, MISSOURI. Takashi Lhasas, is owned by Ronnie Crowder of Independence, Missouri, in the good ole USA.  I have been a breeder, owner, handler for the past forty years.  I also worked with a professional handler and good friend Marjorie Lewis for nearly ten years.  I am presently retired from GM, where I worked as a Defect Analyst in the Paint department.  I share my life with my best friend and partner Wade Koistinen.  Together we also breed and show Lowchen and Havanese.  Last year(2008)  we had the top male Lowchen in the country, Ch. Natchez Starbucks at Laser(Stanley). and our Havanese girl Ch. Heartland's Rumor Has It, (Rumor), won a BIS.  Wade has been a Professional Handler for many years.  He had the Lowchen when we met and together we got into Havanese.  So that's me in a nutshell.

HOW I GOT STARTED

Takashi Lhasas, that most people know today started in the late seventies.  I had went with my Aunt to see a friend of hers that raised dogs.  That friend turned out to be Lorraine Cole of Bel-Air Kennels.  That day I met the dog that has enamored me of this breed for the past forty some years.  His name was Ch. Bel-Air's El Toro Romeo and he was something!  Shining like black silk he was in wonderful coat.  Lorraine had him laid out on a table with his hair combed down, hanging off the edges.  His head was braided on both sides and nearly reached the floor when he stood up.  I was hooked right then and there! To those that don't know him, Romeo, as he was called was used alot in the midwest and was of straight Hamilton breeding. I had to know what kind of dog this was and  where could I get one.  Well to make this story a little shorter, it was years before I got out on my own and could buy one of these wonderful dogs.  I haven't been without one since!  I have been blessed to have been owned by some remarkable Lhasas.I hope you will enjoy going down memory lane with me as well as getting to know some of my kids that are currently here with us.

I am a member of the American Lhasa Apso Club and a past Board Member.   I recently had the honor of judging our Futurity in 2007 and was very happy to see that our breed is in very capable hands.  This was the second time I have been honored to judge at our National, the first being Sweeps at the 1997 show.  It was a remarkable chance to see some of the best, breeders today have to offer.  I was not disappointed and I offer my thanks to all those who brought their beautiful Lhasas to show to me.

So enjoy your visit!